In an era where a generation known as the green generation takes on many environmental challenges one must question our less than enthusiastic participation in hunting. Bridging the gap between hunters and environmentalists has always been a challenge. But attracting the younger generation to hunting has never been an issue. Could it be that these 2 challenges are now intertwined? You don’t hear our generation providing loud outcries against hunting characteristic of some of the more, let’s just say, enthusiastic anti-hunting organizations. But the declining number of hunters from our generation underscores a certain apathy concerning this age old practice. Whether it is because: 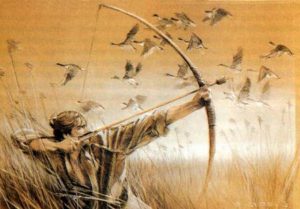 Conservationists know it isn’t healthy for the animal populations whose numbers rely on the management activities and resources of hunters throughout the world. Hunters, in a phrase, are the heart and soul of the conservation movement. They are also proactive warriors for the environment because they experience any negative changes directly. They love the stimulation and beauty of the outdoors and are now taking a much more active role in assuring its healthy survival. They see the effects of global warming firsthand. They know when the environment in which they spend a lot of their time is out of balance resulting in runaway fires and flooding. And without their funding and their controlled harvests, species conservation as we know it would be far less operative. Hopefully we will never get to the place where one doesn’t have to be very environmentally aware to understand that there are less species on this planet.

Regardless the conservation impact, the fact is our generation may not fully comprehend our role in the ecosystem. Sure, we visit nature and love the wilderness but do we really know nature? And do we really know our own nature? Yes ours is a very intelligent generation, but we have been protected from knowing ourselves by a society that is having a serious identity crisis itself. We live in a society that keeps death at a distance. Death is not supposed to happen publicly. In many ways we live in a death denying society. Because of this it may be remiss to believe that we fully understand how our world operates at its most basic level — all things must die to allow other things to live.
&nbsp